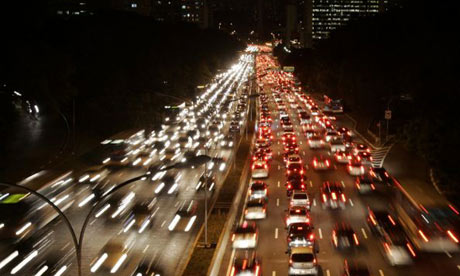 United Nations Framework Convention on Climate Change (UNFCCC) defines climate change as a change of climate which is attributed directly or indirectly to human activity that alters the composition of the global atmosphere and which is in addition to natural climate variability observed over comparable time periods.

Greenhouse gases (GHG) are the atmospheric gases responsible for causing global warming and climate change by trapping heat within the Earth’s atmosphere. The major GHGs include carbon dioxide, methane, nitrogen oxides, and fluorinated gases, such as hydrofluorocarbons, perfluorocarbons and sulfur hexafluoride.

Climate change is one of the great challenges of current society. In the last few decades, there has come more evidence that the emission of greenhouse gas contributes to the effect of global warming, particularly the emission of carbon-dioxide (CO2). Within the transport sector, the greenhouse gas emissions are dominated by the CO2 emissions from burning fossil fuels, which are strongly related to transport energy use. Transport is currently responsible for 23% of GHG and 27% of global carbon dioxide emissions.

Several repercussions will occur if nothing is done to mitigate climate change, such as

Climate change is not an isolated issue. The changes experienced in the environment also reflect in a corresponding deterioration in transport infrastructure. An increased sea level and amount of tidal storm surges increase surface damage, intermittent or permanent flooding, weakening of key infrastructures, damage to drainage, increased coastal erosion and road collapse, and exacerbates salinity. Increased temperature and heat waves cause damage to concrete and bridge expansion joints, rutting, and buckling and fissuring of pavement. Fewer cold days and shorter winters cause reduced snow removal, but increased freeze-thaw degradation of asphalt. Extreme precipitation may overwhelm drainage infrastructure and lead to erosion, scouring, and flooding. Extreme winds and storms can damage bridges, signs, electricity networks, and lighting.

The current transportation network is vulnerable to the effects of climate change. It is important to both mitigate the issue as to lessen the speed and amount of changes and to adapt to a new unavoidable environment. The primary focus of mitigation is to limit the increase in greenhouse gas emissions, whereas adaptation focuses on identifying vulnerable areas within infrastructure and increasing its resilience to climate change.

The IRF Greenhouse Gas Calculator CHANGER is proactive in combating climate change by calculating the amount of greenhouse gases emitted within a road infrastructure project. This new software tool represents an important first step towards the definition of a common methodology for enabling authoritative benchmarking, against which to assess road infrastructure projects.